Did you know that before you as a researcher can use new collections here at Hull History Centre our archivists have to get busy behind the scenes sorting these collections?
When collections come to us they often arrive in a state of chaos and it is our job to make them easy to use. Before we can do that we need to make sense of them ourselves. This is because part of the archivist’s work is to determine if the creator of a collection kept it in any kind of order, and if such an order is present we must seek to preserve it and reflect this in our catalogue.

By doing so we can tell something about the way an organisation or individual managed their records and through this see their ways of working. Now, in some cases this job is easy as collections are neatly packaged up and labelled prior to being brought to us. However, more often we find that we have our work cut out.

A case in point is the papers of socialist barrister John Platts-Mills. Now, when we started this collection we thought ‘a barrister has to have a logical brain to be good at his job so his papers should be in good order’…little did we know!

What we initially thought would be a 6 week project turned out to be a 2 and half month slog. When we opened the boxes to complete a first list of the material in the collection we found a bomb site. The remains of correspondence files were loose in boxes, bundles of papers were kept together in plastic shopping bags, and multiple part files were scattered throughout the collection.

Before we could begin to preserve Platts-Mills’ original order we had to work out what that order might have been. In such cases our work takes on the role of the detective looking for clues.

As we worked through the boxes it became apparent that our barrister had used a system of subject based filing to order his professional papers. We could tell by the file names he had used and the common themes observable in bundle of gathered papers. It also became apparent that he had made a distinction between his legal case work and his personal files which seemed to bear the prefix of ‘p’ or ‘personal’ before the subject title. Thus we could begin to determine a structure for the collection.

The next challenge was to tackle the loose correspondence. Whilst most of it appeared to be in unbound clumps ordered by year some of it was grouped into subjects and cases. Here we had to make a decision, order the correspondence chronologically by year but in doing so loose the evidence of the second filing system, or did we take another approach. We opted for the latter. We decided that it was best to re-integrate the grouped correspondence into the main subject files where possible and that any remaining homeless correspondence would be kept together in its existing groupings and we would create subject files to reflect Platts-Mills’ own ordering system.

With this intellectual chaos sorted we could now turn our attentions to the physical chaos. This task involved reuniting separated parts of files, re-integrating loose items into subject files, sorting correspondence into chronological files and repackaging into archival folders. After this was accomplished our last task was to put the folders into the order determined in our catalogue. As you can see from the photos this was the fun part and we might have made a box fort or two in the process!

The collection is now catalogued, see the source guide or search our online catalogue 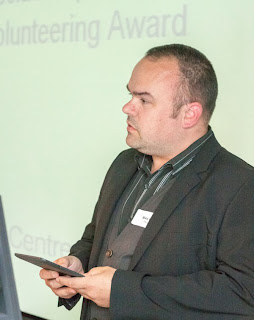 My name is Mike Covell and I am a volunteer with the Hull History Centre’s WWII project. As far back as the days of a separate local studies department, archival unit, and Hull university archival unit I was researching Hull’s history, so when the Hull History Centre opened I made sure I was one of the first to visit, and certainly one of the first to write a review of what the centre had to offer and keeps on offering.

Since it opened in 2010 I have taken part in several courses, researched here, and even lectured at the centre. So when I heard about the WWII project I got very excited to say the least. I had seen an advertisement in The Hull Daily Mail for volunteers and on one of my next research trips I registered my interest with the staff so that I could become part of what I believe is a very important project.

My family and I had always had an interest in WWII after it was revealed my late grandfather was photographed with his family in their home after a particularly horrific raid in Hull. As the photographer passed down the street, through the mountains or rubble, he saw my family and asked how they were. My grandfather did not answer, but instead smiled, threw his thumb up, and created a piece of local history. His photograph was used as propaganda for the war effort, and to this day still gets used in books and in the local press. With this in mind, and bearing in mind what he went through, I wanted to join the WWII project.

For me the project is an important project for several reasons. It helps us to remember the past. It secures the past for future generations, and it gives us new skills and experiences that we can take forward.

Every time we have a session it is a learning experience. We have uncovered families that changed their names to avoid retribution from German sounding names to names such as “Smith” and “Jones.” We have seen firsthand the destruction caused on the various air raids, and we have learned of the tragedies and heroic stories that occurred on our very streets, stories that up until now had been largely forgotten.

During a recent session transcribing WWII documents at the Hull History Centre I was blown away by the great number of cards in just one of the piles I had in front of me. I kept asking myself about the importance of the cards and the names upon them. What really hit home is that these ladies and gentlemen who gave so much between 1939 and 1945 in this “North East Coastal Town” and received very little for it, but they all had one thing in common. They were all volunteers.

With this in mind the least we can do as volunteers is to carry on what we do and remember them for what they did.


As well as cataloguing new collections, part of our work involves reviewing and updating past catalogues to current day standards.

In doing so we often turn up gems that can be easily overlooked. Such a gem was discovered recently when I was working on a small collection of correspondence of the 19th century economic journalist and essayist Walter Bagehot (1826-1877). [If you want to read more about Walter see his entry on Encyclopaedia Britannica or Wikipedia.]

What we found was a wonderful set of letters between ‘Dearest Walter’ and his affianced ‘Dearest Eliza’, daughter of James Wilson the founder of the Economist [If you want to read more about James see his entry on Encyclopaedia Britannica or Wikipedia.]. The letters show a wonderful warmth of affection and character in each and document the six months up to their wedding in April 1858. In this time the couple were separated whilst Eliza received treatment for health problems and had to conduct a long-distance relationship – quite the modern thing! Through the loved up couple’s conversation we see the emotions, fears and hopes that any couple in the early Victorian period might have experienced.

In an ironic twist the letters show Walter to be the fanciful and emotional half of the partnership whilst Eliza appears much more sensible. We see the process of a courtship leading up to the wedding day and hear of all the arrangements that needed to be made. Throughout the whole you get a feeling of genuine respect between Walter and Eliza whose letters have allowed us a rare glimpse into the private world of Victorian romance.


Aside from the personal aspect, these letters provide us with precious details about Victorian society in the 1850s. Details mentioned in passing show that the middle classes were using trains as commonplace methods of transport. They suggest that the business classes were making housing choices based on railway locations to provide ease of access to the capital and regional hubs such as Bristol. The detail also illustrates attitudes to medical theories current at the time through Eliza’s descriptions of her treatment at the hands of Dr Beveridge of Edinburgh.

So as research source these letters give us a fantastic picture of aspects of Victorian life. And lets face it – we all like a good love story! If you want to explore further the reference for the collection is U DX/123 with the descriptions available on our online catalogue