As mentioned in my previous post (see Digitising Larkin - part 1), digitisation is a key part of my role at the History Centre. For for this reason I was offered the opportunity to attend a digitisation training day held at the British Library's Preservation Advisory Centre on November 13 2013.

Whilst Larkin, in the journey detailed by his poem The Whitsun Weddings (drafts at Ref U DPL/1/4/36 & 38 and U DPL/1/5/8), may have been late getting away, I certainly was not. A 4:30 alarm preceded the 6:25 train from Hull Paragon and I arrived in London shortly after 9. Following the short journey from Kings Cross to the impressive British Library, as well as a very welcome caffeine boost, the day began with a short round of delegate introductions. I was immediately struck by the range of organisations which were represented in the room. As well as other academic institutions such as LSE, UCL and the University of Greenwich, colleagues were present from the European Central Bank, St. Paul’s Cathedral, Irish Distillers Pernod Ricard and Egypt’s Bibliotheca Alexandrina, amongst others. The range of institutions represented at the training day speaks to the increasing interest in the digitisation of archival materials. However, no two digitisation projects will be alike. They will be shaped by staff, training and skills, the material itself and the equipment available – it was particularly interesting to hear that there are digitisation projects taking place using simply an iPhone to capture the images.


Jonathan Jackson of the Natural History Museum brought the training day to a close with a thought-provoking remark; that paper records will far outlast their digital counterparts. This caveat affirmed the value of such training days – which lay in the questions they raise, as much as the answers they provide. Attendance at the event has prompted me to be more reflexive about the work I do, to consider where the Larkin's workbooks, as valuable literary manuscripts, fit into the emerging field of the digital humanities. A recent article by ASG Edwards, Professor of Medieval Manuscripts at the University of Kent, challenges many of the perceived benefits of digitisation. Amongst other things, Edwards claims that a sole reliance on digital facsimiles negates the value of the original item by removing the fundamental experience of physically handling a document – surely one of the most joyous aspects of using an archive.

Yet, digitisation allows a much greater amount of people access to materials which they would otherwise never be able to see, thus broadening the awareness of what it is that archives actually do and the benefits they offer the public and professional researcher alike. Larkin himself claimed that literary manuscripts possess two great values – the magical and the meaningful. The former is largely sensory; referring to the paper written on and the editorial decisions made by the author as the words appear, ‘emerging for the first time in this particular miraculous combination’. The latter refers to the way in which manuscripts can enhance scholarly understanding of an author. Whilst Larkin was often self-effacing and reticent when discussing the validity of studying poetry, both values are, in my opinion, present here. The workbooks, full of self-doubt and humour, offer a tremendous insight into both the man and his methodology. The scrawl of his customary Royal Sovereign 2B pencils make for pages which are pleasingly imperfect, yellowed from nicotine and decades of consultation. They are, in many ways, an extension of Larkin himself.

It is our hope that this will be conveyed in the images when they are made available online but we have some copyright hurdles to clear before then!.

Just a quick blog to introduce myself…. 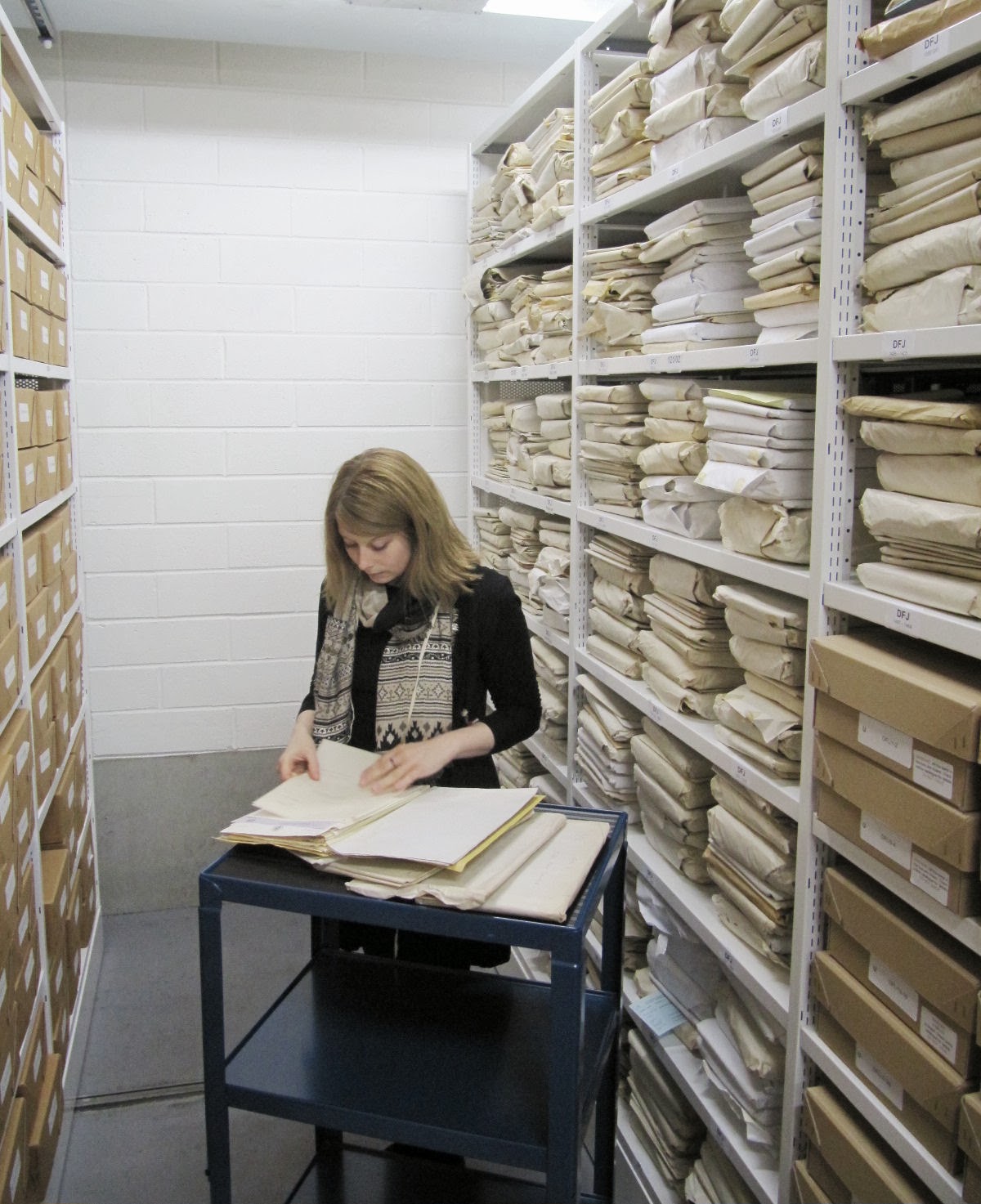 I started work on the project last week and so far have been trying to get to grips with it all. Over 2000 architect’s files to weed, repackage, and catalogue, not to mention consultation and outreach activities. And all by August 2015!

We hope to hold a workshop around March/April 2014 to tap into the knowledge of professionals and specialists on the subject of architecture. With this in mind we are looking to recruit an architect and a postgraduate student interested in using historical architectural records.

We also hope to recruit volunteers with an interest in architecture to help us with additional research into buildings and sites worked on by Francis Johnson. Volunteering opportunities will be available from May 2014. Please do get in touch using my email address below if you are interested.

It’s going to be a busy but exciting time! I shall keep you posted on our progress over the coming months whenever inspiration strikes or something interesting happens! So stay tuned…