A Visit to The National Archives

I am very lucky to have just spent five days working at The National Archives in Kew as part of the ‘Transforming Archives’ programme with seventeen other trainees from archives across the UK.

During our visit we were given a behind the scenes tour of the archives. We saw how material from one building to the next were transferred via motorised trikes and lifts when they were requested for viewing by the public. It was interesting to see the process of when someone requests a document, and how it is electronically tracked through every stage of its movement through the building quite like an airport system.

The storerooms are full of archival treasures from 1000 years of history, and there was one room which particularly sparked my curiosity. We were shown only the door as its contents were so valuable and secretive just very few in the whole organisation had the key. You could only imagine what was inside!

Archivists are very skilled!
The staff were all very welcoming and experts in their fields. There is a lot of skill involved with being an archivist. We learned about the importance of archives, what makes an archive valuable and the potential barriers to public access. As archivists are now embracing the digital age, new skills need to be learned and standards need to be developed, for example with social media and 'born digital' records.

We spent each day working on a variety of skills and exercises that are important in the archives profession, such as pitching for funding and evaluating the success of outreach projects, as well as traditional skills such as preservation standards, accessioning (documenting the receipt of archives in your repository) and appraisal (selecting documents for permanent preservation in the archive).

We also had a session on blogging and created our own VoxPop videos (link to come later!) about ourselves and what we were doing in each of our traineeships, and looked at the use of virtual classrooms with the education team.

Digitisation on a Large Scale
As I am working on several digitisation projects this year, such as the Francis Johnson Grand Tour Diary, I spent an afternoon with the Commercial Delivery team. Each member of staff was part of a group that had a different but equally important role in the digitisation process. I spoke to staff beginning in the commission and acquisition of jobs, then to image capture on the overhead cameras, to quality checking each image and then the final transfer of the files to the customer.

It was interesting to see how a large scale organisation manages the files from each aspect of the process and how there is a procedure for rectifying errors such as missing pages or poor scans. I came away from that afternoon with a better knowledge of digitisation both as a commercial and preservation activity. It can increase accessibility to material that are at risk of being lost by no longer creating damage through handling, particularly to fragile documents.  In the wider world of heritage, digitisation as a service can also support not only archives services, but museums, historic sites and libraries too.

Interactive Virtual Books
There was one use of technology within the public space of the archives which I thought was particularly useful for heritage interpretation. I was able to explore William the Conqueror’s Domesday Book on an interactive touchscreen within The National Archives ‘Keeper’s Gallery’ exhibition space. The touchscreen uses the ‘Turn the Page’ software to allow the user to leaf through pages and interact with the book using magnify and rotate features. I will be using similar software for the Francis Johnson Grand Tour diary project, and it was interesting to see an example of the technology being used and to experiment with its features.

This past week I have particularly enjoyed meeting the other trainees from services across the UK and learning from a range of perspectives and experiences. We will be meeting each other again for visits at each other’s archives to discuss each other’s services and learn from each other’s experiences which I think will be highly beneficial. I will be blogging about these in the near future! We have also been using the Twitter hashtag #TransformingArchives if you would like to keep up with the latest news from myself and the rest of the trainees as there will be much more to come.

Overall, I have learned over the course of my week is that archives need to be creative to survive. We need to engage with new methods of archives interaction and outreach to new audiences to make archives more accessible. But we also need to carefully reflect on our engagement methods by considering funding, audiences and how it will ultimately affect the archive in the long term.

From Digitisation to Minecraft: My First Month in the Archives

I have been working as the Transforming Archives trainee at the Hull History Centre for just over a month now and I have lots to tell!

The handwritten diary details Johnson’s Grand Tour across Europe in 1931, complete with sketches and photographs, and is bound in leather.
The diary is being digitised so you will be able to view the work in a digital format where it will be easy to browse through the pages and magnify the detail. 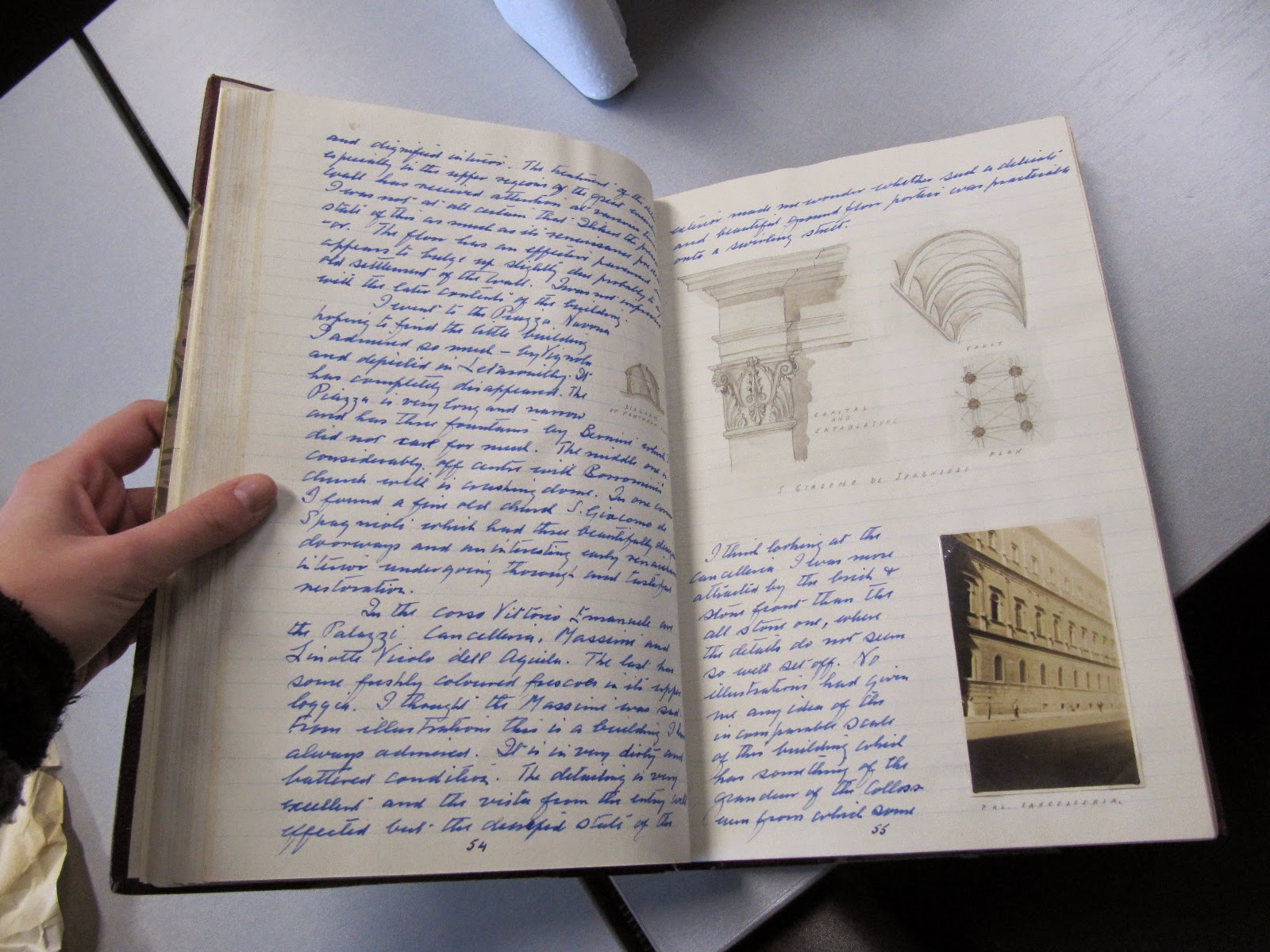 Protecting the object you're digitising is an important part of preservation. It is a very big diary at over 360 pages and could not be opened fully flat, therefore creating a suitable angle for the scans was a challenge. To protect the binding of the pages I used a combination of a book rest and wooden plates.

I also experimented with room lighting, and backing papers to obtain the best quality image possible. I placed black sheets of paper behind the page I wanted to scan as this made the images and text more defined, diffusing any text showing through the page. Whilst the scanning is in progress I am also creating a filing system for the digital files, keeping each name to a set standard. I have learned that digitisation involves patience, care, experimentation and a need for standards to keep images organised and at a consistent quality and size. 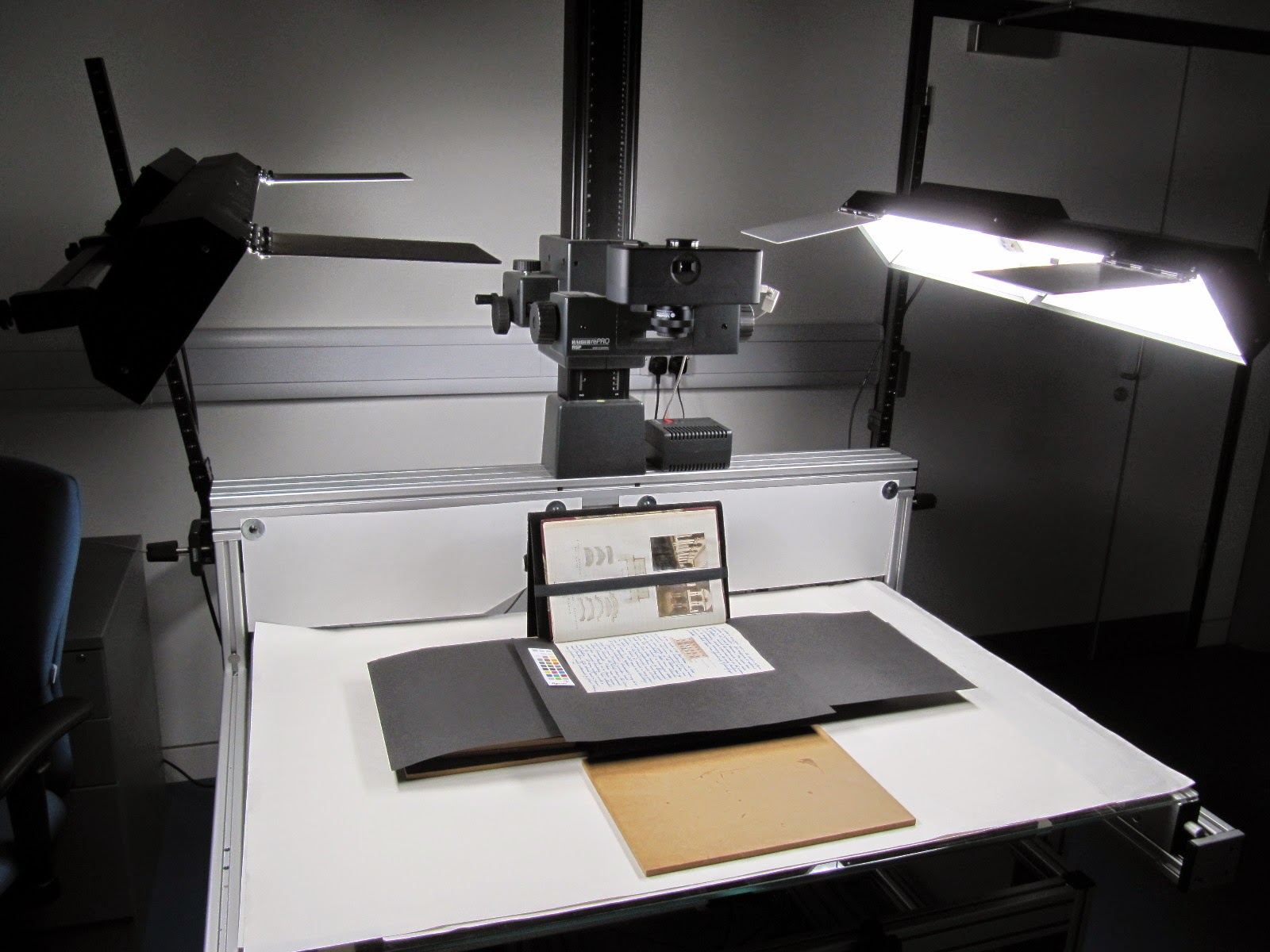 The Hull History Centre’s Minecraft project, HullCraft, is now well under way. The aim of HullCraft is to engage young people with archive material by allowing them to create, individually or collaboratively, a virtual world of architecture and artefacts from the archives at Hull History Centre using Minecraft.

For the past month I have been meeting with Joel Mills and Aaron Harter to plan our HullCraft server, the map design and how we can protect and showcase our gamer’s fantastic builds.

In the server we are creating a virtual Minecraft experience of using archives by rebuilding the Hull History Centre and using it as the spawn point.

We were keen to have the HHC as the focus of the server as it acts as a reminder of what HullCraft is about: the journey of visiting the archives, obtaining your architectural plan, going away to research and build (and having fun!).

We are also designing a showcase world where you can travel back in time from the HHC and explore Hull from past periods. Screenshots coming soon!

We are looking forward to being at the Platform Expo event at Hull College on the 14th November, so come and say hello! We are even bringing along our life-size Creeper and Steve recycled from old archive boxes.

And that's not all!
This month I will be spending a week working at The National Archives in Kew with the other  Transforming Archives trainees. I am looking forward to meeting the other trainees, seeing all the different departments at TNA and how they differ from the Hull History Centre. I will be blogging about my visit in the very near future!

A new interface for our online catalogue

A previous post sought feedback on our on-line catalogue and we are delighted to announce that it now has a new interface with new features and a new address.

The new interface uses Blacklight (the same software used for the university's library catalogue). We started by looking at our current catalogue, the aspects we wanted to retain and those we wanted to improve, we also looked at other on-line catalogues for ideas and inspiration. The quickest way to see what we have done is to go and have a look but before you do so here are a few highlights from the journey we have taken.
Data analysis
A key requirement was the better integration of the local studies book material. Much of the data analysis of the information our library and archive systems created was undertaken for us by Data Curation Experts - they handed back an infrastructure and solution and colleagues in the university worked on the interface so it works on a phone, tablet or PC.

Local studies books
One problem we had previously experienced was presenting the library data through an archive catalogue. The new interface has fixed this and also allowed us to expose the author and subject indexes for the first time and we hope this will encourage users to browse around and discover more useful titles and resources.

Archive collection
For each archive collection we hold we produce an overview describing the context of the material including a biography of the individual or the organisation that created the material and a broad overview of its contents. Restricting a search to archive collection is a very effective way to identify collections that we hold that are relevant to a particular topic or subject – eg search the entire catalogue for Philip Larkin and you get over 9000 results - restrict this by format to Archive Collection - you get 66 - which is far more manageable!

We have also added a link (from the Archive Collection Summary screen) to allow users to download a PDF version of the catalogue as many users find this an easier way to find the information they are looking for.

Date slider
Being able to browse and filter a search result was always important and the new interface allows users to filter by repository, in addition the local studies books can also be filtered by format type, subject keywords and by author.

The date slider (see right) adds a touch of fun to filtering by date (hopefully users will be familiar with this type of tool from on-line retail websites). It also gives a representation of the number of items in the catalogue across that period.

Icons
One of the most visible elements of the new interface are the colourful icons to distinguish between different types of material (including CD/DVD, microfilms, maps etc). To keep this simple all items for the archives are either archive items or archve collections - so if you are looking for a map in the archve collections use map as a search item and restrict format to archive item.

New address
The new interface can be found at http://catalogue.hullhistorycentre.org.uk

There might be a few gremlins - if you come across a broken link or something isn't quite right please use the feedback button on every page to contact us.