Earlier this week we started our adventure with the National Archives and Hull History Centre. We travelled to Salford Quays, ‘the Venice of the North”, to attend DCDC16 – Discovering Collections, Discovering Communities 2016. This two day conference brings together hundreds of delegates and experts to discuss how to maximize the potential of our heritage collections.


DCDC16 gave us the opportunity to not only discover the challenges that the archive sector is facing, but also show us the huge variety of ways in which archives and museums can utilise their collections and translate this into social, cultural, and economic impact.

It was also great to be able to meet the rest of our cohort, to get to know them in person and see the wide variety of backgrounds that Transforming Archives has brought together from all over the country.

Among the panels and workshops we saw many varied projects from different organisations that are trying to connect their archives with a new audience. For example, the Know Your Place is a digital mapping project which connects historical maps with modern communities. Poetic Places is a free app that brings poetry and historical records together and creates a dialogue between the archive collections materials and its original locations. The Cambridge Community Heritage programme was a clear example of how to engage local community into heritage and archaeology, as the director Professor Carenza Lewis explained how the CCH programme spoke directly to local groups and got them involved at every stage of the project.

On the train back home we had lots of ideas and thoughts about the last few days, remembering our excited conversations with our colleagues and thinking about how we can take these experiences and apply them to our own projects and ideas at the History Centre - watch this space!

In my mind, there’s nothing quite like a handwritten letter. Text and email may be quicker and easier, but I just can’t imagine them acquiring the same level of fascination in years to come, that an old handwritten letter can generate today. The Hull History Centre holds an endless array of correspondence, including emails, faxes, typed letters and handwritten letters, across many different collections. Correspondence stored in the archives ranges from formal business communiques to private love letters, and to mark World Post Day, I would like to highlight three of our collections which contain significant correspondence. 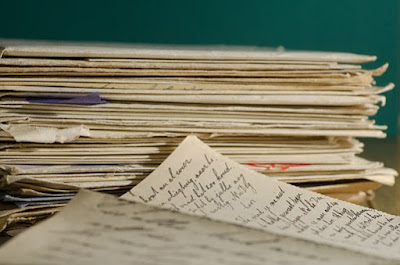 The Papers of the Sykes Family of Sledmere contains hundreds of handwritten letters by Sir Mark Sykes (1879-1919). Mark Sykes was a writer, traveller and soldier, but is perhaps most famous as a politician and the co-creator of the Sykes-Picot agreement (1916); an agreement that continues to shape the Middle-East to this day. He was a crucial figure in Middle-East policy making during the First World War and his papers are a very rich source of material for research in this area. His correspondence includes over 400 letters to his wife, Edith, many of which are illustrated with hand-drawn cartoons, as well as official correspondence relating to the war in the Middle-East. The wartime material includes various notable items such as, a draft of a letter from Mark Sykes to Winston Churchill which indicates his strong support for the idea of a Dardanelles offensive at a time when Churchill was trying to convince the War Council of its viability. There are also reports on such issues as the pan-Arab party in Syria in 1915 and the Armenian question, as well as telegrams from Arthur Balfour and many papers relating to Mark Sykes’ work with F.G. Picot for an Inter-Allied settlement in the Middle East (the Sykes-Picot agreement). Material from his Middle East mission of 1918-1919 includes 85 letters, more than half of them about the Armenian massacre of 1915 and refugees.

We also have an extensive collection of the correspondence of Poet and Librarian, Philip Larkin. He was a keen letter writer and kept up regular correspondence with his family, friends and colleagues. Some of the more well-known names that appear amongst Larkin’s letters include: Kingsley Amis, John Betjeman, Cecil Day-Lewis, Douglas Dunn, Seamus Heaney, Andrew Motion and Margaret Thatcher. Larkin wrote on all manner of topics, from the publication of his books, library work and personal matters. One particularly interesting file (U DPL31/12) contains 34 letters, dated between March and April 1968, on the subject of proper forms of address. This correspondence was initiated by a letter from Larkin to The Times newspaper and developed into an entertaining series covering the use of Christian names in letter-writing, the Americanisation of English, and the use of the title 'Mister' for convicted criminals.


The Hull University Archives also holds various collections relating to politics and pressure groups, including the papers of the pre-eminent civil rights barrister, John Platts-Mills QC. Born 1906 in New Zealand, Platts-Mills moved to the UK in the 1920s. He joined the Labour Party in 1936 and remained committed to the causes of the Left throughout his life, even at times being suspected by authorities of holding communist sympathies. In 1945 he was elected Labour MP for Finsbury but was later expelled from the Party for helping to organise a petition in support of Pietro Nenni, an ally of the Italian Communist Party. After his expulsion he returned to working as a barrister, having been called to the Bar in 1932. He established himself as one of the country’s leading barristers and became noted for his mastery of courtroom theatre as well as for his defence of such infamous clients as the Great Train Robbers and the Kray Twins. His correspondence, held at the History Centre, covers both personal and professional matters and is sometimes accompanied by related press cuttings and printed material. The material includes items relating to his support for various left-wing campaigns and associations, as well as his well-known cases, including that of the Kray Twins.


Handwritten letters and other types of correspondence can be found in abundance amongst the collections of archives across the country. They form part of the valuable evidence, retained for posterity, of past actions and events, as well as providing unparalleled insights into the minds of the correspondents. Long may the handwritten letter continue and Happy World Post Day!

Inspired by our collections whilst preparing for a talk, I thought the History Centre should contribute a little something towards National Poetry Day on the 6th October.

Hull has had a strong association with poetry down the years. Home grown talent famously includes the seventeenth century poet Andrew Marvell, author of ‘To His Coy Mistress’ which many of us will have studied at school. A twentieth century example can be found in Stevie Smith, noted for her illustrative talents as well as her poetic ones.

Perhaps though, Hull is better known as a city that becomes a home to poets from elsewhere, attracting them in and holding them captive (in a poetic rather than illegal way). In this category we have the likes of Douglas Dunn, Sean O’Brien, Peter Didsbury, Andrew Motion and, of course, Philip Larkin.

But this blog is not another exhibition of worthies with Larkin as the star…. Instead, I want to highlight one of the unsung gems we hold here at the History Centre.

Amongst the papers of the Forbes-Adams family held in the University Archives, there is a fantastic series of letters sent by WWI British soldiers who, having been sent home as invalids, were being cared for at Lady Lytton’s Hospital, Charles Street, Berkeley Square, London [reference number U DDFA3/6/32].

Hidden amongst the letters is an inconspicuous looking scrap of lined paper. But on this scrap is a remarkable snapshot of trench life captured in poetry. We know very little about the poet. We have no name, no age, we don’t even know the exact date of the poem, other than to say it was written sometime between 1915 and 1920.

Whilst many might not consider it to be poetry of the highest calibre, it succeeded in both amusing me and provoking thought about the conditions associated with life in the trenches during WWI. Read it for yourself, what does it make you feel…

Posted by Claire Weatherall at Thursday, October 06, 2016 No comments: Links to this post

This week we welcomed two new Transforming Archive trainees who will be working on developing their skills in digitisation, digital preservation and outreach.  We have asked them to introduce themselves:

I’m Tom Dealey I originally qualified as a structural engineer at Liverpool University, but through my experiences as a website developer for local heritage organisations, as well as volunteering at the HHC and the Ferens Art Gallery, I have decided to swap careers and move into archives and conservation work. This traineeship is the perfect opportunity for me to not only use my project management and IT skills in a new setting, but also to gain a huge amount of hands-on experience and learn specialist archival skills and technology. I am very keen to learn more about the latest technology that is being introduced into this field and how it will affect the future of archives.

I’ve been able to quickly settle in at the HHC, mainly because I was already friendly with many of the staff from my previous work as a volunteer here. Expect to see regular updates on the blog about the work I’m undertaking over the course of the next year.

I am Francisco Castanon I hold a BA in Media & Audio Visual Communication Studies and Journalism from Universidad Europea de Madrid and I spent my last two years of university in Istanbul where I was selected to the Erasmus Mundus Programme in Photography and International Journalism.

A few years ago I was awarded the Leonardo da Vinci grant, which gave me the opportunity to move to London, working as a Journalist with the Leonardo da Vinci programme (European internship abroad) at The Prisma, a Latin American bilingual newspaper based in London. During that time and due to my passion for the preservation of books, manuscripts, maps, drawings and nature, I decided to volunteer in different organizations like Lebrecht Music and Arts Photo Library, the Natural History Museum – Special Collections Library, the Imperial War Museum Photograph Archive and The National Portrait Gallery’s Heinz Archive and Library.

I am sure this opportunity will help to meet really interesting people, learn new skills and improve my knowledge about the archive sector.

Posted by Hull History Centre at Wednesday, October 05, 2016 No comments: Links to this post