The 28th September marks National Poetry Day in the UK. To celebrate National Poetry Day 2017, we have decided to shine a light on the, perhaps, lesser known poets, whose works are now part of the archival collections at the Hull History Centre. Many of you may know that we hold significant collections relating to Philip Larkin, Stevie Smith, Archive Markham, and Douglas Dunn. But did you also know, that in the University Archives, we have collections relating to poetry publishers, such as Peterloo Poets (ref. U DPP), who helped up-and-coming poets get published?

Peterloo Poets was established by Harry Chambers, a life-long poetry enthusiast and founder of the poetry journal Phoenix, in the mid-1970s. In 1976, Chambers took the huge step of leaving his salaried job and moving with his family to Cornwall where he ran the press initially from their home in Treovis near Liskeard with funding provided by the Arts Council and support from his wife Lynn, who became a full-time administrator for Peterloo Poets in 1980.


Harry Chambers was a very active publishing director and was involved in all aspects and stages of the publishing process, including typography and design. Manuscripts were commissioned and solicited by Peterloo Poets but over 1000 unsolicited manuscripts were also received each year and Chambers had exclusive control over selecting volumes for publication. He also edited and contributed features to the annual Peterloo house journal, Poetry Matters (1983-92) and produced special editions celebrating the works of Charles Causley and Philip Larkin.

Harry Chambers retired as Publishing Director of Peterloo in 2009, but continued to take an active interest in the world of poetry, while health allowed, when he moved to York. His achievements were recognised in 2010 with an MBE for Services to Poetry. Harry Chambers died in York on 14 September 2012.


The Peterloo Poets collection (U DPP) predominantly contains copies of poetry books published by Peterloo Poets and poetry files, each relating to a specific poet and/or one of their works. Published matter in the collection also includes items from the Phoenix Pamphlet Poets Press, copies of the Phoenix Quarterly Series and Poetry Matters, the Peterloo Poets magazine. Poets represented in the published works of Peterloo Poets include U.A. Fanthorpe, who was awarded the Queen's Gold Medal for Poetry in 2003, William Scammell, Elizabeth Bartlett, Ann Drysdale, Dana Gioia and many others.

Poetry still remains a beloved art form, allowing people the freedom to express their voice in verse, and the acquisition of collections relating to modern English literature is a key part of the Hull University Archives’ collecting policy. Indeed, poetry is an important part of our society’s culture and deserves to be preserved for the enjoyment of generations to come.

Posted by Claire Weatherall at Thursday, September 28, 2017 No comments: Links to this post

Archives...what does that word mean to you? Does it conjure up visions of boring dusty documents and illegible text? Think again!

With the Turner Prize launch just around the corner, we've gone arty with the theme of this fortnight's City of Culture blog at Hull History Centre...

Following on from the 'Cabinet of Curiosities' exhibition at Hull's Maritime Museum, here at Hull History Centre we have created a new exhibition, funded by the Heritage Lottery Fund.
It will challenge your view of archives by showcasing some of the wonderful doodles and drawings to be found within our collections. Through beautiful sketches, watercolour paintings, drawings and doodles you will discover that archives are not all about text. Illustration has long been used as a wonderful way to exercise freedom of expression, and you will see how images can add as much to our understanding of the past as the written word.

The items within the exhibition span the 14th through to the 21st centuries and include artwork created by volunteers and staff who have taken inspiration from collections at the History Centre. Come along and see art in all its many guises, from medieval doodles through to modern day sketches. There will be interactive elements to help demystify the work carried out at the History Centre where staff work to manage and preserve the City's documentary heritage.

Hidden amongst the exhibits is our oldest illustrated inhabitant, Ranulph the rabbit. At almost 600 years old he can’t move very fast so you have a good chance of spotting him!

'Doodles and Drawings' opens at Hull History Centre on the 10th October 2017 and runs through to 6th January 2018. There will be events and activities running alongside the exhibition so don't forget to check the History Centre's website for further details.

Posted by Claire Weatherall at Monday, September 25, 2017 No comments: Links to this post

On 22 September 1778 the Manchester and Favourite sailed into Hull to mark the opening of the Port’s new Dock. This ceremony heralded the completion of the City’s first wet dock, and marked the beginning of a new era for Hull.

The establishment of the Dock was driven by two factors: increasing congestion of shipping in the Haven (the Old Harbour), and pressure from Customs and Exercise who were demanding the establishment of a legal quay to facilitate the levying of customs dues. Hull had a historic exemption from legislation stipulating that all goods, except fish, were to be landed on open wharfs with resident customs officers. As a result of this exemption, Hull had become notorious for smuggling by the eighteenth century.  There was much resistance in the City to any change to the status quo. However, the threat of the establishment of a legal quay elsewhere on the Humber motivated interested parties to act.

Power to construct the Dock was obtained in the Dock Act (1774), which created the Hull Dock Company. The Act empowered the Company to raise £80,000 in shares, and granted it the power to borrow an additional £20,000 should the need arise. £15,000 out of the Custom’s Revenue was allocated to the Company to facilitate the construction of the Dock, along with all the defences (walls, ditches etc.) west of the River Hull. The right to levy dues on shipping entering or leaving the Port of Hull from the end of 1774 provided the Company with additional funds.

The foundation stone was laid on 19 October 1775 by the Lord Mayor Joseph Outram. The 1774 Dock Act had stipulated that the Dock was to be constructed in seven years, a target that was easily met; the Dock was constructed in four years at the cost of £64,588.

At almost ten acres in size Hull’s new Dock was, for a time, the largest in Britain. Its large size meant its wharfs would become home to whalers and large foreign-going shipping, while most inland and coastal traffic continued to use the Haven. This situation would last until additional dock accommodation at Hull was provided.
The construction of the Docks in four years was a notable achievement. However, it was not without its problems and a number of rebuilding works were required. Notably in 1814-15, when the lock-pit was rebuilt on a larger scale and the entrance basin was strengthened. Another hindrance in the operation of the Dock was that until 1829 the only means of entering the Dock was via the congested River Hull. This would prove a significant impediment to shipping until the opening of Junction Dock provided direct access from the Humber.

When opened the Dock was not given a formal name, and until 1809 it was simply known as ‘the Dock’. Following the opening of Humber Dock it became known as ‘the Old Dock’. It was not until 1855 that it was formerly renamed Queen’s Dock in honour of a visit to Hull by HM Queen Victoria the previous year. Queen’s Dock would eventually form a system of docks referred to as ‘the Town Docks’.

Queen’s Dock would remain in operation for over 150 years until its closure in 1930. The owners of the Dock – at this point the London and North Eastern Railway Company – had determined that the cost of maintaining and operating the Dock rendered it no longer viable. It was sold to Hull Corporation, and over the course of the next four years the Dock was filled in. Further details on this transformation can be found in our 2015 blog post. It was re-opened on 19 September 1935 to the public as Queen’s Garden, which remains open to this day.

To coincide with the re-opening of Hull New Theatre this weekend, the staff at Hull History Centre have been busy listing all of the New Theatre programmes from October 1939-February 2008 so that performances, dates and performers can now be searched on our online catalogue. 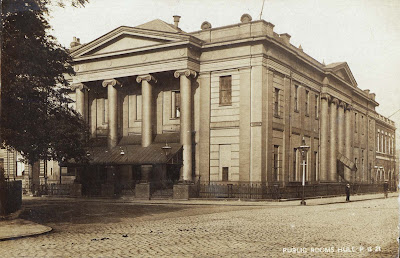 The Hull New Theatre opened on Saturday, October 16, 1939 with Noel Gay’s ‘Me and My Girl’ featuring Joan Lake and Reg Andrews.

Performances carried on throughout the Second World War with the theatre’s first manager, Peppino Santangelo, insisting that they carry on regardless. The theatre even suffered a direct hit during May 1941 when the Sadler’s Wells Opera Company made a visit to Hull in order to perform away from the bombing in London!

Famous names of stage and screen that appear in the programmes include Sean Connery in a production of ‘Seashell’ (Nov 1959), Peter Wyngarde who performed at the Hull New Theatre four times between 1947 and 1976 as did John Le Mesurier between 1939 and 1940.

The programmes are not the only resource that we hold relating to theatres. We also have numerous play bills, original building plans, photographs, newspaper advertisements and articles.

The majority of our theatre programmes have come from the Local Studies collection but the History Centre has continued to receive donations of programmes from individuals and organisations. The programmes for other theatres in Hull including The Palace Theatre, Anlaby Road and the Alexandra Theatre on the corner of George Street and Charlotte Street are now also being catalogued and will be made available on our online catalogue shortly. Watch this space…!

Freedom: The Art of Political Expression

At Hull History Centre we hold many collections which document a wide range of political issues and campaigns. With City of Culture’s ‘Freedom’ themed events in full swing, we thought we would use this blog to highlight some hidden gems.

Below you will find a selection of items showing how individuals and campaign groups have used art as a means of political expression. Look out for the curve ball which hints at issues of censorship and freedom of speech.


Visual posters like this one, produced by the Municipal Association Group as part of an election campaign, can tell us lots about the issues particular local elections were contested on. Whilst election statements and party manifestos can also tell us such information, visual representations can help us understand the different ways in which messages were put across to the electorate.


Victor Weisz, born in Berlin to Jewish parents, was a gifted caricaturist and political cartoonist. Before moving to Britain in 1935 as a result of his strongly anti-Nazi political position, his work had appeared in German newspapers. In Britain his work appeared in the News Chronicle, the Daily Mirror, Evening Standard and the New Statesman. By the 1940s he had adopted the pseudonym 'Vicky', became a British citizen in 1947, and tragically took his own life in 1966.


Founded in 1898 by Miss Frances Power Cobbe, the British Union for the Abolition of Vivisection plays an important part in the history of the animal rights movement in Britain. For a century the BUAV has been leading campaigns against vivisection, testing of cosmetics on animals, and use of animal testing in the development of treatments intended for human use.


The censorship of visual expressions of opinions was a common feature of many political regimes during the 20th century. This fact shows that opponents of a particular position have long believed visual messages to have a strong impact on the spread of information and the persuasion of individuals.

If any of these items have piqued your interest, you can investigate further by paying us a visit and delving in to the collections.

Posted by Claire Weatherall at Monday, September 11, 2017 No comments: Links to this post