Saturday 16th and Sunday 17th November were two days of celebrations of what Rugby league means to the city and people of . A display of material from the archives included a scorecard from the first match between Hull FC and Hull KR (in 1899), match day programmes and items relating to the construction of the grounds.  The Hull History Centre sent out an appeal to fans to come in and share their memories with other fans and also help to bridge gaps in the centre's archives by depositing items of their written memorabilia into the archives for posterity.

During one poignant remark, Colin Hutton said "I congratulate myself for making the decision many years ago to move from where I was born, in Wigan, to .  I had the warmest welcome and I've stayed here ever since".

The day was rounded up with our VIP rugby league guests enjoying a tour of the Hull History Centre and they were greatly impressed by the wealth and significance of its historical records. 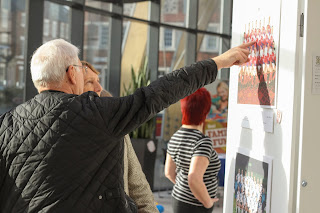 The second event was a rare screening of Mitchell and Kenyon Early Rugby League silent films at the .  Once again, Professor Tony Collins compared the event and gave an insightful commentary on the social, cultural and sporting heritage of the city in Edwardian times. The films were accompanied by an improvised musical score performed by silent film pianist, Cyrus Gabrysch.

The film presentation and also the event on Saturday, were both extremely well received by all those who attended and the weekend of celebration events may well form the beginning of a trend by local residents who wish to participate in creating a more comprehensive record of Rugby League material at the Hull History Centre for present and future citizens of to learn from and enjoy - if you have items you wish to donate - please contact us. The centre is also looking to work closely with the national Rugby League archive based at the University of Huddersfield.

The events were the Centre's contribution to the national Explore Your Archive campaign.
Posted by Hull History Centre at Monday, November 25, 2013 No comments: Links to this post

Next year will see the centenary of the outbreak of the First World War, a conflict which is rightly seen as one of the defining moments of modern history. What has come to be called the Long Nineteenth Century came to a cataclysmic end which, it’s probably true to say, changed everything about western civilisation. It’s right that the conflict is commemorated nationally, regionally and locally.

has its own First World War history. Many of the themes will be familiar, including the sacrifice of the Hull Pals, the Zeppelin raids and the anti-German riots. However the stories of the local people whose lives were changed by the war are less well known.

Here at the History Centre we hold some records about the activities of local people and organisations during the war. But we are aware that these don’t come near to telling the full story. For instance the remarkable scrapbook which City Architect Joseph Hirst assembled, of news cuttings and other documents relating to his son Captain Joseph Hirst of the East Yorkshire Regiment, tells only one story among many.

In the run-up to the start of the commemoration, we’re hoping that people with archival material relating to ancestors who served in the First World War might consider depositing them with us, so that they can be preserved and made accessible for future generations.

‘Lest We Forget’ is not just a reminder of remembrance on a war memorial. It is also the best reason I can think of for preserving the records of the ordinary people of Hull who fought in that terrible conflict.