Tell the World: The Mole Behind the TV

The 23rd October is celebrated by chemists as Mole Day – 23/10 reflects the 6x1023 atoms in one mole, the mass of an element equal to its own atomic weight.

In this blog we’ll be looking at chemistry in Hull, including one piece of research that helped create the modern digital world – the development of Liquid Crystal Displays (LCDs) at Hull University.

Liquid crystal research at Hull took off in the 1950s under the supervision of George William Gray and Brynmor Jones (future Vice-Chancellor and namesake for the university library). As head of the Liquid Crystal Research Group (LCRG), George W. Gray led the university’s pioneering research throughout the next 40 years. His 1962 book, Molecular Structure and Properties of Liquid Crystals was the first English-language book published on the subject.


Liquid crystals were of particular interest because of how they changed colour under an electric current, potentially leading to better electrical displays. The breakthrough came in 1973 when the team worked out how to synthesise crystals in the cyanobiphenyl group, liquid crystals that were stable at room temperature and could be used in electronic systems.

This breakthrough led to a whole new wave of electrical devices, from aircraft computers to pocket calculators, and eventually to modern LCD computer and television screens. There’s a good chance you’re reading this on an LCD screen right now!


Chemistry in Hull isn’t confined to the university labs. Many industrial chemical companies have set up factories in the city, taking advantages of Hull’s docks to import raw materials and export finished products.

Perhaps as many as ten paint manufacturers were active in the Hull during the 19th Century, of which the Sisson’s Brothers are probably the most well-known today. Thomas Sissons started as a whale oil merchant before opening a paint factory around 1803 – since good-quality paint was made from whale oil, this step was just cutting out the middle-man.

A more colourful side to Hull’s chemical past is found in along Morley Street in Stoneferry. One of the many business set up by local pharmaceutical giants J. Reckitt & Sons Ltd was a synthetic ultramarine factory, creating hundreds of tonnes of bright blue dye from 1884 onwards. After German dye imports were halted by the First World War, it became Britain’s biggest ultramarine manufacturer, a title which it held until its closure in 2007.


More information about Hull’s chemical industries can be found in the Hull History Centre, starting with the Trade Directories from 1834 onwards.

The History Centre also holds the records of the Liquid Crystals Research Group (U DLCR), including some of the original lab equipment and test samples, as well as the Queens Award for Technology shield, awarded to the university in 1979.

My year as a Transforming Archives Trainee

It has been a while since I finished my Transforming Archives Trainee with The National Archives at Hull History Centre and I just wanted to reflect and write about my experience.

When I look back, I can’t be more grateful to both the Hull History Centre and The National Archives for this unique opportunity. I’d also like to give special thanks to my managers Simon Wilson and Emma Stagg for their patience and effort to make this an exceptional experience.

The final outcome of my training was a successful job application. I am now working as a Digital Imaging Officer at the London Metropolitan Archives!

My traineeship also inspired me to launch a job board for digitisation jobs, which aims to help other trainees and professionals find a job in the sector.
Digital Preservation Guidelines
I had the opportunity to attend the course ‘An Introduction to Digitisation and Digital Preservation’. This was provided by The National Archives and The University of Dundee. The essays I wrote and conversations I had with my tutor Melinda Haunton gave me a clear understanding of the problems that institutions can experience with Digital Preservation.

For example because the concept of digital preservation is quite new, many institutions are still trying to understand what digital preservation strategy is best for them, how to carry out this process and how to raise or allocate funding and resources. There is not a widely accepted consensus, this can lead to poorly thought out execution and a lack of funding necessary to produce useful results.

I also understood the technical challenges of “software obsolescence” and how file formats that we use now may not be usable in 10 or 50 years. For example, most people are familiar with JPEG formats for images now, but in 50 years time, we may have moved onto other file formats.  It could be very hard for future generations to access these file formats. That is why any attempt to preserve documents/files in a digital format must consider this and ensure documents are stored in simple, secure, affordable, open source, popular and easy to access formats.
With assistance from University Archivist, Simon Wilson and fellow trainee, Tom Dealey, we completed a self-assessment exercise using the Levels of Digital Preservation developed by the National Digital Stewardship Alliance, which aims to build awareness of current capacity and inspire organisations to develop their digital preservation activities. (see the full blog on this from March this year).

Digitisation
I really enjoyed digitising medieval parchment rolls from the 16th century. Our last exhibition '’The Hothams, Governors of Hull & the Civil War'’ required us to capture oversized scrolls that were 3 metres long, this was particularly challenging as our equipment could only capture small sections of the scrolls at a time, we then had to stitch these images together with Photoshop.

I was also involved with many other events relating to Hull City of Culture 2017 including the ‘’Hull Charters’’ exhibition which showed how the people of Hull were granted privileges, rights and responsibilities which now form the bedrock of how we live as citizens today. I assisted in retouching the digital images of some of these charters.

I helped with preparations for ‘’Larkin: New Eyes Each Year’’, an exhibition that explored connections between Larkin’s life and work in Hull. I helped digitise a wide range of materials including photographs, letters and documents from his collection. I enjoyed learning about Larkin’s life and understanding how exhibitions are put together from beginning to the end.

Conclusion
I believe this traineeship has been about much more than developing my skills. It is about empowering and inspiring people to develop their passion for the Archives and the Heritage world, being in a privileged position to unlock and reinterpret the past whilst understanding how future digital generations will be able to use, access and interact with our heritage records.

I was given so many opportunities to move forward in my professional career. I had a life coach who helped me to focus on my strengths and motivated me to find new ways to develop my confidence. I had the chance to attend a wide range of workshops and conferences around the country and I had hands on experience which honed my skills.

As a result of all this, I gained not only skills and a job at the London Metropolitan Archives, but developed new ideas, I launched a job board for digitisation jobs I am working on a new project related to ai jobs, which aims to empower the new workforce as digitisation, the fourth industrial revolution and AI enter the mainstream. 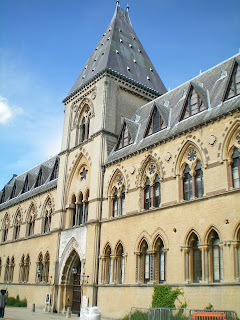 I am the recently appointed City of Culture Digital Archivist. This archive will seek to document Hull’s time as City of Culture in order for it to become a key part of the collective memory of the city and to inspire creativity and innovation for years to come. Largely digital in format, it will challenge us to develop new strategies, technologies and workflows for preserving and providing access to archival records.

To assist with this, from 11th-13th September I attended the yearly meeting of the Preservation and Archiving Special Interest Group (PASIG), hosted by the Bodleian Libraries & Digital Preservation at Oxford and Cambridge (DPOC) at the Oxford University Museum of Natural History. PASIG is dedicated to advancing the practice of digital preservation and archiving.

Over the course of three days we were treated to more than 50 talks, panel sessions and vendor demos – so of course I won’t be summarising every single one! But there were certainly a few sessions that struck a particular chord with me that I’d like to talk about.


Eduardo del Valle of the University of the Balearic Islands gave a talk about catastrophic data loss which served as a cautionary tale. Having lost 248GB of digitised files during a data migration, which amounted to three months scanning work on fragile, rare, unique books his university has now implemented Libsafe. This means that all NDSA levels of preservation are reached, providing the expectation that such a loss should not occur again.  He warned against taking assurances from IT services at face value and that it’s not worth taking risks with data as anything that can go wrong will go wrong! This talk underlined the usefulness of such standards as the NDSA levels of preservation and how they can provide a framework that protects valuable information.

Patricia Sleeman of the United Nations High Commissioner for Refugees (UNHCR) gave what was, in my (and I think many others’) opinion, the standout talk of the conference. Opening her talk with a compelling video of the poet and activist Emi Mahmoud performing her poem “Head over Heels”, Patricia went on to speak with power and urgency about the crucial work of the UNHCR. When compared to the need to provide nutrition and shelter to displaced people it can seem hard to justify spending money on recordkeeping and archives, but as Patricia explained, the protection of culture and information is vital to the protection of a sense of humanity. Not only can the availability of authoritative and verifiable information assist in the battle against dangerous fake news, the preservation of cultural identities that oppressors have sought to destroy can help rebuild people, their lives and their memories. It was a sobering reminder that what we do is about more than bytes and boxes on shelves and that to loosely quote Patricia, “we have a right to be forgotten but we also have the right to be remembered”.

Whilst the conference covered a hugely diverse array of subjects, from storage trends to advocacy to certification and beyond, four overarching themes emerged to me:
It was great to learn so much about what is being achieved in the field of digital preservation internationally and to make contacts that I can hopefully collaborate with as we make progress with the City of Culture digital archives.