This Month in Hull: August

For anyone who needs some good pub quiz facts, we present the August edition of 'This Month in Hull'.

In 1833, on the 12th, a public meeting was held to decide how to commemorate the Hull MP and anti-slavery campaigner William Wilberforce. Two resolutions were passed: ‘That it is the opinion of this meeting that an obelisk or pillar will form the most striking and appropriate memorial’; and ‘That a subscription be entered into for the purpose of carrying the proposed object into effect.’

2 August 1833, Hull Advertiser and Exchange Gazette, announcement of the death of William Wilberforce in his 74th year of age


In 1834, on the 1st, the foundation stone was laid for the Wilberforce monument at its original location at the corner of St John’s Street, close to where Beverley Gate once stood. It was laid by Richard Bethell MP of Rise, the Chairman of the Memorial Committee. The statue of Wilberforce was added after the building of the obelisk on 12 Nov 1835. The following is an image of the Wilberforce statue in its original location on the Queens Square side of the old bridge leading to Whitefriargate, before it was moved to its current location outside of Hull College.


In 1834, on the 11th, the Hull and Selby Railway Company was formed. The History Centre holds plans and section drawings showing the line being 'A railway from Selby through Hemmingborough, Wressle, Howden, Eastrington, Blacktoft, South Cave, Brantingham, Elloughton with Brough, Welton with Melton, North Ferriby and Kirkella, Hessle and Newington to Humber Dock.' The plans are accompanied by a book of reference for engineers, and were created by Walker, Burgess and A. Comrie in 1834 [C CQP/2].

In 1840, on the 7th, renovation work was carried out on the clock in the tower of Holy Trinity Church. Originally built by Joseph Hindley of York with one face, the clock subsequently had four faces. Our Local Studies collections include an illustration of Holy Trinity in 1829, prior to the work being undertaken [Lp.796.5 HOL/15].

In 1845, on the 24th, Stoneferry Waterworks supplied its first water, processed from the River Hull, after the foundation stone was laid on 29 April 1844. Among the records relating to the waterworks is a postcard showing a view from across the river [C DMX/181/1].

In 1856, T.J. Smith bought a retail chemist shop at 61 Whitefriargate. This business would grow to become the global company of Smith & Nephew. The Whitefriargate premises was the business' first site before production was relocated to Neptune Street on Hessle Road.


As always, if you would like to find out more, come down to the History Centre to see what else we hold...

Just popping down the allotment...

The 13th to the 19th of August 2018 is National Allotments Week. As an active 'allomenteer' I thought a quick look at the development of allotments in the area might make for an interesting blog, so I had a look to see what records we have here at Hull History Centre.

Most allotments today are owned or maintained by local authorities, although by no means all are, and the first municipal allotments in Hull can be traced back to 1895. In this year, two sites were established to support the unemployed in the town. One was located near to the depot on Sculcoates Lane, whilst the other was on land by the prison on Hedon Road. In 1909, the Small Holdings and Allotments Act was passed, and this led the Hull Council to establish a Smallholding and Allotments Committee. The purpose of the committee was draw up specific rules and regulations and to issue tenancy agreements regarding the letting of allotments.

But it wasn't only Council run allotments that were available to aspiring 'allotmenteers'. The following tenancy agreement relates to a plot of land in Garton which formed part of the Sledmere Estate owned by the Sykes family of the East Riding. The pro-forma printing of tenancy agreements with the name 'Tatton', in conjunction with the manual replacement of that name with his successor's name 'Mark', demonstrates that the practice of renting private land was a well established one on the Sykes estate. This tenancy agreement also demonstrates the traditional measure used to define and allotment area, that of rods (also known as poles or perches) which was a length equating to approximately 5 ½ yards.

A number of local associations were established which sort to bring like-minded gardeners together and to help manage individual allotments. The Golf Links Allotments on Hall Road in Hull had their own such association, the Golf Links Floral and Horticultural Society.

The Hull and East Yorkshire Allotment Council was set up in 1949. This organisation wasn't linked to a specific allotment, but rather sought to offer advice to growers as well as to promote details of upcoming outings, events and general news from around the area through the publication of a quarterly journal. It offered practical tips for the coming months, and you will see from the following images that some of these tasks are familiar although methods have certainly changed. Notice, in particular, the heavy use of chemical products such as DDT, the devastating impact on the environment of which was yet to be recognized. 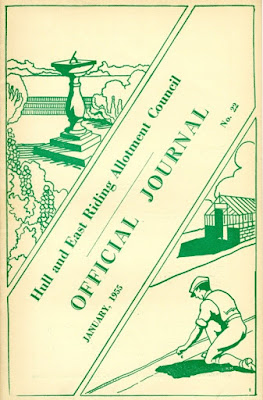 The growth of allotment culture meant that more people could take part in flower and horticultural shows. These events had become very popular in the Victorian period, although entrants tended to be gardeners working on large estates for the landed gentry. With land for cultivation more readily available, the ordinary 'allotmenteer' could now take part. The following is a programme for the twenty-second Chrysanthemum Show held at Hull City Hall in 1913. Programmes for events such as these included advertisements for businesses selling seeds and plants and so help us to understand the commercial side of allotment keeping.

The adverts in this programme prompt a short aside: although the head office for the Fish and Manure Company was on the High Street, it’s main works were at one time on Maxwell Street, along with the Hull Hide, Skin and Fat Company, two cod oil manufacturers and two manure manufacturers as well the Milestones Chemical Works. This must surely have been one of Hull’s more aromatic areas!

If you are interested in the history of your allotment site, or allotment history in Hull more generally, then come and see us at the Hull History Centre. But for now I will leave all of you green fingered people with the following challenge; can you produce a display as impressive as this one taken found in the records of the Hull and East Riding Chrysanthemum Society?