Whilst continuing to work on the 'Unlocking the Treasures' project, I came across this edition of  Daniel Defoe's 'Robinson Crusoe' [L.008 BRO]. 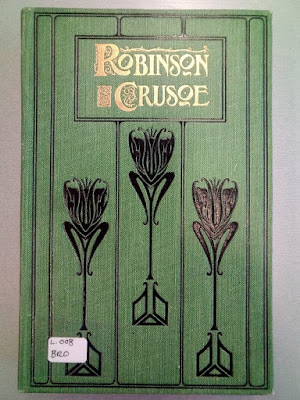 The front cover of this issue is very eye-catching with the black art-deco style motifs on an emerald -green background with the title “Robinson Crusoe” printed in gold. The book itself contains several illustrations in black and white print.


The publisher of this work was Browns of Savile Street & George Street, Hull which is why the copy is in our Local Studies Collection. However, as readers of the said book will be aware, Daniel Defoe's famous fictional castaway, Robinson Crusoe, set sail on his epic voyage from Hull on 1 September 1651 only to get shipwrecked on a remote island near Trinidad.

In those days, there were no docks, and ships used to moor in the Old Harbour of the tidal River Hull, crowded up to the rear of the merchants’ premises lining the High Street. Queen’s Dock, which was infilled in the 1930s to create Queens Gardens, was not built until 1778. There is now a plaque commemorating Robinson Crusoe in Queens Gardens.


As Defoe writes, it was a journey to remember from the very start:

"The ship was no sooner out of the Humber than the wind began to blow and the sea to rise in a most frightful manner; and, as I had never been at sea before, I was most inexpressibly sick in body and terrified in mind."

Cast upon a desert island where he spent 28 years, two months and 19 days one of the most famous fictional characters ever created reflected:

“Had I the sense to return to Hull, I had been happy.”

For more finds from the collections please keep an eye on the blog!