Remembering those that fought and died in the Great War

To commemorate the Armistice and Remembrance Sunday, the Unlocking the Treasures team wanted to take the opportunity to highlight a really interesting volume held within the Local Studies collection. Home Fires: the magazine of the Park Street Unitarian Church [Ref: L.288 PAR] gives an insight to the Great War through the eyes of those men that fought in the conflict.

Home Fires was the magazine of the Park Street Unitarian Church in Hull. The Local Studies Library has a single volume covering August 1916 to July 1919. The servicemen, many of whom were ex-pupils of its school, were sent copies of the magazine, much to their delight. Sergeant Gilbert Coles in his letter to the magazine expressed his thanks and looked forward to his copy in anticipation. The magazine not only provided the opportunity to turn their thoughts away from the war with news of home, Park Street Church also provided parcels for servicemen, particularly at Christmas. Private Frank Rusholme wrote to thank the ladies of Park Street [Unitarian Church] for the ‘splendid parcel’, in which contained basic commodities such as soap and towels which were difficult to obtain. He also received a photograph of the Park Street Church, which Private Rusholme recalled ‘carried him right out of this land of mud and water’.

The darker side of the War also comes out. Private Rusholme’s letter expresses the kind sympathy for the loss of his brothers and sister. Unfortunately we do not know how his siblings died. This may have been as a result of zeppelin raids on Hull, or for his brothers the added possibility of being killed on the front-line.

Letters from the servicemen give an insight into conditions and devastation the war inflicted. Gunner A.M. Hill describes a scene of a village as a confusion of bricks, planks and plaster. No roof or wall was left standing and every scene was one of awful desolation, all due to the all-devastating fire by artillery from both sides.

The all too familiar story, however, is one of death. Private W. J. Jackson wrote to the church magazine in 1916. In one letter he recalled how he crawled between his blankets wishing for something to read while his feet thawed. Private Jackson goes on to recall the dangers of shells falling from German Artillery and the constant threat of German snipers. In November that same year, Private Jackson was killed in action, by a sniper. Those that knew him remembered his spirit and devotion to defend the honour and safety of Britain. Before the war Private Jackson was a teacher at St. George’s Road School.

Servicemen described a mutual respect between those who fought on both sides. Private Jackson, before his death revealed that German prisoners were brought down into the trenches, and only pity was expressed. He added that as prisoners passed, they were greeted with a nod and a smile as though they were comrades. German heroism was not a theme for any sort of address, including in Hull, but in a published article from the Home Fires, some were reminded that even in this bitter war there was a common bond between England and Germany, and that is the desire to sacrifice for the cause, for which both sides think is right, that our men should fight.

An interesting issue that comes from the letters of servicemen is the ruinous effects drink was having on some. Private H. Machin recalls how he could almost write a book on the evils of drink in the army. The problems were such that the French abolished the sale of absinthe. However, this was just one of the many drinks for sale in France at the time. Private Machin goes on to add that many in the army are being ruined by body and soul through drink. He, like others felt if soldiers were prevented from drinking it would do more good than people at home realise. Private Frank Rusholme agreed that preventing drink was a good proposal, but he declared that retaining this privilege meant the men were more likely to commit under the worst conditions, than if drink were taken away.

A lot of focus during the First World War concentrates on the campaigns in Europe. We tend to overlook the campaigns fought elsewhere. Private Wilfred Dennis writes of his experiences in fighting in the defence of the Suez Canal. At the time of writing Private Dennis was recovering from dysentery, south of Cairo. He recalls his unit, the Imperial Camel Corps came under an inferno of fire. For the next three hours they were pinned down, only to be saved by sunset. Surprisingly there was not a single causality. The next morning German snipers were up early. A signaller was hit, but this was just a flesh wound Private Dennis recalled. Fighting was carried out in 135 degree heat. Thirst among the soldiers was a common theme. Several men from the East Yorkshire Regiment were hit in this particular conflict, one died while been carried back to safety. Those that were injured had to make the journey of 12 miles on camel back. Private Dennis and the Camel Corps had emerged from the battle a ragged crowd, some without boots, and some without shirts, soap or tobacco.

As the war drew to a close and ceased, the Home Fires magazine provides some interesting detail of what was happening locally. For example, over 100,000 Belgians and Dutch embarked for home from Hull’s King George Dock, as too did several thousand Germans who passed through the City. Rations were reported to be improving. More sugar became available, while tea, lard, bacon and margarine became unrestricted. Meat also become cheaper. We also find reference to Dull Hull? The answer to this was ‘it will not be dull when the suggested improvements are completed to the Boulevards and boating lakes’. It was even proposed that Hull was to have its own airport and had a promising future in aviation!

Overall the Homes Fires magazine helped morale among the servicemen from this area. It offered an opportunity to help pass time, but also tells the stories and issues that affected them, some of which is somewhat overlooked. Perhaps the importance of this magazine to those that fought in the Great War can be summed up by Private Wilfred Dennis:

‘Home Fires seems to bring things at home much near to one, and as I read the chatty little letters of old friends I forget the burning sun, the hot sand, and the terrible loneliness, and think of the green fields of Ferriby Sluice and the muddy old Humber, the happy times I’ve had crossing it and the laughter and romping there when we got to the other side’.

Thoughts by the Wayside, and Fancies by the Fireside

Thoughts by the Wayside, and Fancies by the Fireside [Fruit of the Hours of Idlesse during a Decade of Years, Act 15 to 25] [Ref: L.822]

This book is a prime example of “Unlocking a Treasure” - everything about the book is a feast for the eyes – from the embossed gold-leafed pages, to the amazing hand written pages [about 170 in total] and the incredible hand coloured illustrations. 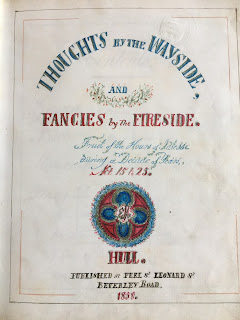 Unfortunately, we don’t know the author’s name since the volume is not signed. The book includes original material by the author as well as pieces from other sources. 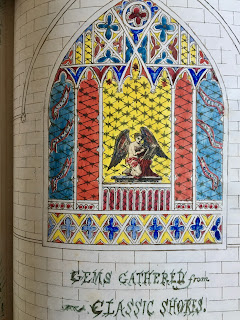 For instance, the section entitled “Gems Gathered from Classic Shores” [see photo] contains the works of Ovid, Horace, Cicero, Plato, Tibullus and others. Although the writer is not known to us, you can gain an insight into their life by reading through the poems, essays and musings. Given the nature of the book, it has a very intimate feel - there is a page entitled “In Memoriam – Topsoe – Obitt Nov X 1855” where the Author has a written a three page poem on the loss of the family cat. The illustrations are all works of art in themselves and some of the pages still have the original tissue paper over them to protect them. My favourites are “Mohammed”[see photo], “A Valentine” and “A Winter Walk”. 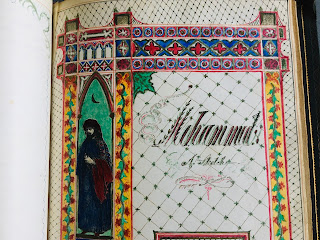 This volume acts as a time capsule into Victorian England. It is hard to imagine many people, myself included, having the time, the inclination, and in my case, the ability to devote to such a work of art.

Every year all kinds of individuals and organisations offer us material for the archives. We accept many of these offers gratefully and happily accession the proffered material to the collections; but have you ever wondered what happens to the stuff we do not want?

Now, this is a controversial topic in some quarters. As an archivist, the minute you say ‘can we dispose of this if we don’t want it, or would you like it returned’ to a depositor, we invite accusations to the effect that we are failing to preserve vital pieces of the nation’s history. What we are actually talking about in these instances are the multiple copies of a particular council report of which we only need one; draft and copy deeds where we have the official signed deed; or the editions of published works which are already on deposit in various libraries, and which do not constitute archival material. Once we explain this, fears are allayed and depositors go away reassured that we are not in fact throwing away unique medieval deeds!

So what do we do with the stuff we do not want? Quite mundanely, we recycle it using confidential waste bags and an external recycling company. How boring.

Now, before lockdown, I was working on a very large collection in which I found huge numbers of duplicate pamphlets and reports. Some of the pamphlets were bright and attractive looking. Of course, these all went the journey into recycling bags. But, with 20-27 September being designated ‘Recycle Week’ in the UK this year and September as a whole being dedicated to lifelong learning, it has got me thinking about whether or not there is something more interesting we could be doing; perhaps we could use the items we would usually recycle in the pursuit of learning a new hobby.

We have a fair number of creative types at Hull History Centre so I put this question to them, and I received the following suggestions:

As you can see, origami ideas were abundant!

The upshot of this is that I’m going to challenge my colleagues to make something creative out of the next item they are about to recycle. We will be posting our creations on Twitter @Hullhistorynews as and when they come into being; look out for #recycling!

So I now put the question to you: What interesting and creative things have you done with unwanted paper items? Let us know on Twitter @Hullhistorynews.

Visit our website to find out more, or search our online catalogue to discover the collections.